Here is a portion of a Glockapps report on email deliverability -- the email in question was a personal email of the kind that I might send to a friend on gmail or hotmail. 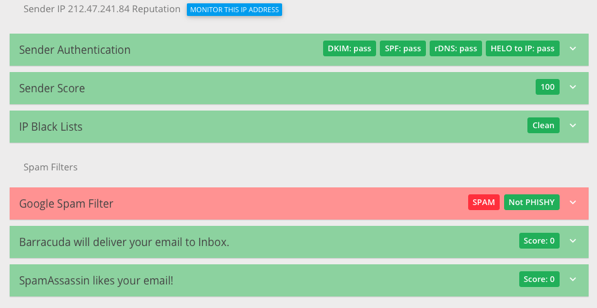 This report apparently shows that I have done the right things with regard to properly identifying my email: reverse DNS, SPF, and DKIM are all set up correctly. Additionally, my site (obviously!) doesn't send spam, as hinted at by sender score and blacklist results. However, all test emails sent to gmail and hotmail addresses went to spam. This was particularly entertaining recently when a Google recruiter contacted me several times because he didn't bother to check his spam folder -- that's right, even if the thread was initiated by a gmail user (and your responses thus have a giant, unforgeable string in their In-Reply-To), gmail will still happily spam-filter your replies!

Google does not provide any tool to give insight to low-volume self-hosted email providers. Their postmaster tools don't show any information until a sufficient volume of email has been sent -- their guidelines are hundreds of emails per day, which indicates that these tools are geared towards businesses, rather than individuals. However, I strongly suspect that I do know the reason, and that it's related to my choice of hosting provider: the netblock that my email server's IP address is part of has a low reputation.

Frustratingly, there is no way to know which netblocks are "clean" and which aren't without trying some. This process is slow, expensive, and aggravating. The secrecy and mutability of the lists means that there are vastly conflicting views about the efficacy of gmail and hotmail's spam protection; see for example this Hacker News thread.

It's grimly amusing to know that the state of the art in commercial spam filtering is a 90s-era secret netblock blacklist, but it's also very concerning that the consequence of major email hosters making understandable (if lazy) decisions has such a chilling effect on self-hosted email.