Reading and writing Dreamcast Visual Memory Units with an Arduino

A long time ago I wrote a post on accessing Sega Dreamcast VMUs. This is an update to that post which significantly improves the read support to the point where it works reliably using a standard Arduino.

I should add that I thought my read support was reliable last time, until I got reports from people who were having trouble with it and bought a few more VMUs to test with. I am quite a bit more confident in the new version, because it doesn't take any shortcuts: the previous version used "dead reckoning" for some parts of the protocol, but this version is more than fast enough to keep up with the VMU without making any assumptions about its state.

This post is probably even less accessible and interesting than most of my code posts, though if you're into assembly language optimisation then you'll love it. If not, the summary is that it's practical to use an unmodified 16MHz Arduino to receive Maple bus data (and even arbitrarily-long packets) by running it as a logic analyser running at about 5 million samples per second. The rest of the post is about the optimisation story that got me to this point.

A Visual Memory Unit (Visual Memory System in the USA) is primarily a save game card for Dreamcast systems, but it also has a little LCD and buttons. They look like this: 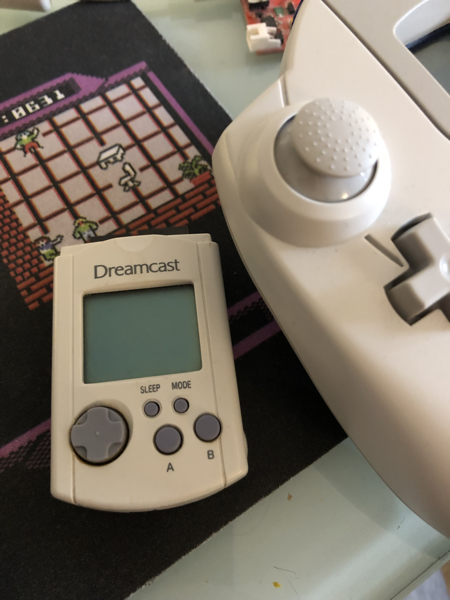 VMUs slot into the Dreamcast controller and can display images during gameplay. 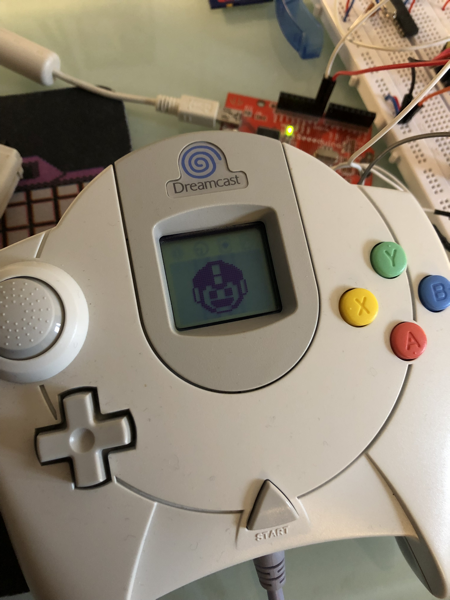 From my perspective, the most interesting thing about them is that they also function as completely self-contained handheld gaming units (for some reason): 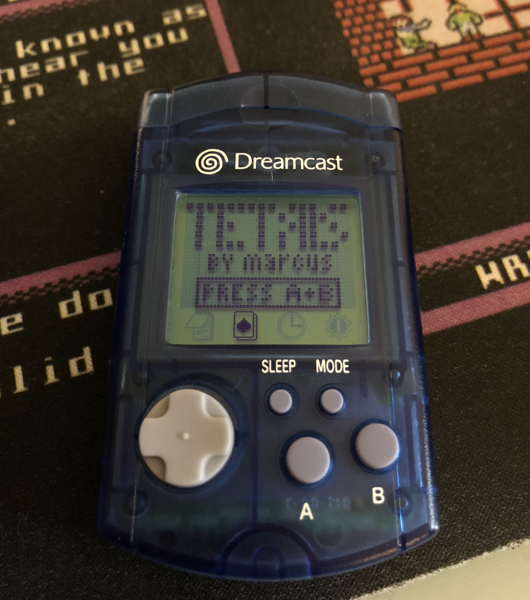 Actually, that's a lie. The most interesting thing about them is that it seemed like it should be possible to read and write data on them using nothing more than a Dreamcast controller and an Arduino. This post is mostly about how you do that.

VMUs communicate with the mothership (which is usually a Dreamcast) using a protocol called Maple. This is pretty damn fast (for an glorified memory stick), running at 2 megabits per second, sender clocked. Here's Marcus Comstedt's writeup of the wire protocol. The summary is that it uses two wires (plus power and ground), with the data and clock lines alternating every transition, and signals changing at speeds of up to 0.5ms (or even faster, it turns out, when the VMU is in control).

Receiving VMU-clocked data with an Arduino

There are two major VMU hardware hacking efforts that I've found, Marcus Comstedt's and Dmitry Grinberg's. (Both of these sites are fantastic.) Marcus and Dmitry point out that sending data to the VMU is very easy, because you can send at whatever speed you like. However, receiving data is rather more difficult, as the VMU controls the speed.

In pseudocode, receiving this data would look something like this, assuming the clock and data pins are called PIN1 and PIN5 (following Marcus' naming scheme):


This pseudocode receives two bits, and takes into account the fact that clock and data pins switch roles every bit. On an Arduino running at 16Mhz, we have 16 cycles per millisecond. At 2Mbits/sec, that means that at the very most we have to complete the above pseudocode, to receive two bits, in 16 cycles.

Doing the obvious thing (and failing)

The obvious thing to do is something like this, using slightly-abridged AVR assembly language with labels matching the pseudocode above:

Straightforward, but rather problematic:

Without going into too much more detail here, it's possible to get a loop like the one above down to 16 cycles, but it doesn't seem that easy to make it significantly better than that. As discussed above, 16 cycles for two bits is the bare minimum, but practically speaking 16 cycles is too slow: firstly, the VMU is sometimes faster than 2Mbits/sec, and secondly even if it were not, it's easy for transmitter and receiver to get out of phase in such a way that the receiver misses some bits: 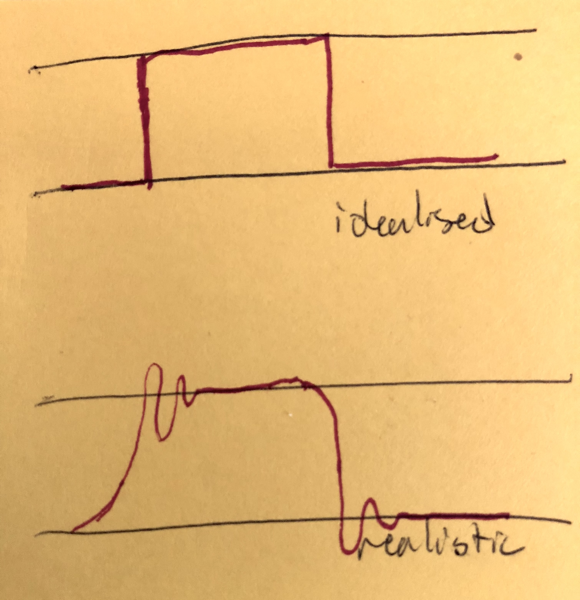 Dmitry's approach to this problem is to use a significantly faster processor, an STM32 clocked at 80MHz, but I wanted to stick with Arduino, so couldn't follow his lead.

Marcus had a different solution: you don't actually need to implement the Maple protocol in real time. All you need to do is make sure you capture every signal change on the two pins. If you store the complete set of signal changes, you can do the decoding "offline", after the receive has finished. In effect, you make a special purpose logic analyser to capture the communication, and then decode it later.

The great thing about the logic analyser approach is that it's so conceptually simple. Here is the pseudocode:


Unfortunately, the simplicity comes at a cost. Every bit involves two signal transitions, and we have to capture both of them. Since one bit arrives every half millisecond, that means we have a quarter of a millisecond to read and store the two samples -- or just four Arduino clock cycles.

Marcus used a special hardware device as his logic analyser, but I didn't have one of those.

Here is the naive Arduino code to do the above, annotated with the number of clock cycles each instruction takes. I've also started using real registers -- here the working register is r18 (which is a "scratch" register for AVR):

We can immediately see the problem with this -- it's too slow! Reading, writing, and looping take five clock cycles, and we have a budget of 4. It's also rather wasteful, because we're using a whole byte for clock and data lines. And on top of all that, we still haven't checked the end condition, so this loop will run forever.

What happens if we put more bits into the data word, and move things around so that we have an equal number of cycles for each sample?

This is much nicer, though it's harder to understand. We now use two registers, r18 and r19. We store two samples in one byte by using the SWAP instruction, which swaps the lower four bytes (one nybble) and the upper four bytes. We just need to ensure that we have no more than four bits of input (we only have two, CLOCK and DATA) and that these bits show up only in the lower four or upper four bits.

This still isn't good enough, though -- four cycles per bit is too slow, practically speaking, even if we were checking the end condition, which we aren't. Also, since we only have two bits of data, shouldn't we be storing four samples per byte? Packing extra samples into a byte is important because the Arduino only has 2 kilobytes of RAM. At two bits per byte, that gives us an absolute maximum message length of 512 bytes -- but practically speaking, we get far fewer than that.

Without going into the details, it's possible to store four samples per byte if you ensure that your inputs are in the lowest two bits by using LSL (shift register contents left by one bit) and SWAP.

After some experimentation, I had an implementation that could read four samples in 16 cycles, check an end condition, and store all four samples in one byte. But it was still too slow: as discussed above, to accurately receive 2Mbits/sec, we must be faster than 2Msamples/sec, not exactly the same speed.

But then I thought: we're stuck with the Arduino, but we can still make hardware changes. What if we connected the data and clock lines to multiple places on the Arduino? Specifically, what if we connected them twice: in the lowest two bits of one port (PORTB), but also on another port (PORTC), two bits further up? If we did that, we wouldn't need to do so much shifting and swapping, because the inputs would be, in effect, pre-shifted.

After making this change, and doing a bit of experimentation, I ended up with the following. The comments show the cycle count followed by positions of each sample across the three registers it uses.

A couple of comments on this:

To use the macro, unroll it several times. Because the macro both begins and ends with an IN (which takes a sample), you have two spare cycles between each macro invocation to do 'housekeeping'. Below, we use this feature to bail out of the infinite loop if we run out of free space:

As discussed, the Arduino I'm using has 2KB of RAM, and I'm sampling at over 5MSPS. This gives me approximately the world's worst logic analyser, running out of memory in about one-nothingth of a second. Although in theory you can store a sufficient number of samples in 2KB, in practise the VMU spends a lot of time waiting around doing nothing between blasting out small chunks of reply, which means a lot of sample space is occupied by this dead air.

Fortunately, all commands which produce long replies from the VMU are non-destructive: they're device IDs, or flash reads. So the solution is to repeat the command, and ignore everything we've already seen on the repeats. This means we can build up the complete response one 2KB chunk at a time.

This obviously requires that the VMU be very deterministic in its timings, which, fortunately, it is. It doesn't seem like this approach should work nearly this easily, but it does.

This support is far from perfect -- I still get bad reads somewhat frequently. This is less of a problem than you might expect, because the Maple library (and in particular the VMU dump program) reads multiple times until it gets two which are the same. This seems stable (if slow). There's definitely room for improvement here: the first thing I'd like to try next is improving the hardware. I'm using a breadboard to split my clock and data signals across two pins, and I suspect that this introduces extra capacitance and/or ringing which interferes with the sampling.

Read and write support is also very slow. There is some low hanging fruit here -- a big reason for the slow-down is that each transaction transfers 1.5KB of data from the Arduino to the Python library, and this could be slimmed down significantly (by having the Arduino translate the samples into bytes).

To be honest, I'm surprised that this was practical at all.

Get it from Bitbucket Github:

Build and upload the binary to your Arduino. You will need to edit the serial port in the Makefile.

See the README and vmu_image.py for (very simple) image format.

Tetris is available from Marcus' site.

Use as a library

Have a look at the MapleProxy class in maple.py. The utility programs above are good examples of how to use the library.